The Master and Master-Elect and new Members take their Oath of Office at a ceremony immediately prior to the Livery Dinner during the course of the Company’s Charter Weekend celebrations.

The Master’s Court of Assistants Officers take their Oaths at the AGM in Bedern Hall before processing to All Saints’ Church for the Charter Day Service in the company of Masters from London, Richmond (N. Yorks), Glasgow, Dundee, Irvine, Kirkcudbright and York.

The major objectives of the men and women of the Company are:

Major dates from the Company Calendar are: Second Weekend in May – Inauguration of the new Master and new members followed by the Company Livery Dinner in the Merchant Adventurers’ Hall and Charter Day Service at All Saints Church Pavement the next morning at which the Lord Mayor reads the second lesson.

In November, the Company holds its Martinmas Feast in Bedern Hall. This is predominantly for Company members and their families and friends. 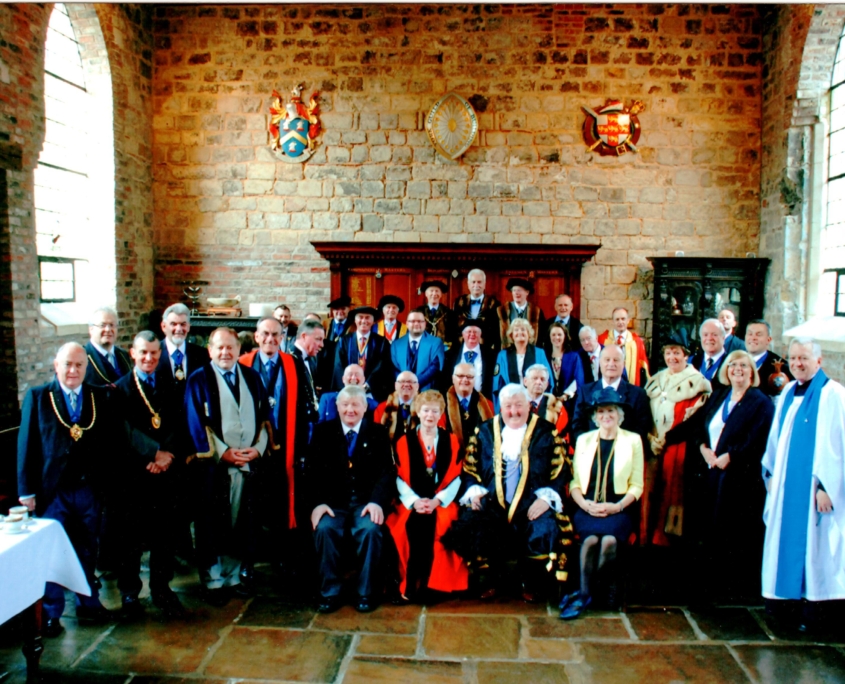 Bedern Hall – the home of our Guild

After dinner speech given by Richard Watson, Sheriff of York 2010/11 in Bedern Hall.

‘Masters, distinguished guests, ladies and gentleman: I have always thought that, among a City of so many splendid buildings, Bedern Hall is one of those jewels – off the beaten track but, thankfully, one which is becoming increasingly prominent in the life of the City. As I began thinking about what I was going to say, I came across the following, written by local journalist, Chris Titley, and I thought his comments really said it all:

Those in the know can find city centre tranquillity when the foot streets are at their most hectic. This is because York has laid on a series of escape routes. All over the city, little alleyways lead you, the experienced resident, to instant calm and quiet. Among them is Bedern. Nip through the covered passage and you are away from bustling Goodramgate into a York hideaway. Here, modern brick homes nestle alongside Bedern Hall.

Its history is the history of York. And it has thankfully, been well documented by the late Dr Richard Hall of the York Archaeological Trust. Dating from the 14th century, it was first a timber building but, some 10 years later, rebuilt in stone. Did merry revelry raise the original to the ground? Here sat the Vicars Choral for communal eating.

The Vicars Choral were an instrumental part of Minster life from 1250 onwards. As Richard Hall explained, Canons were responsible for the daily routine of worship and a medieval Canon was guaranteed a good income from church taxes. It meant the positions were often filled by friends of the King or members of the Royal Household. They were, therefore, often required to be away on royal duties. They had to provide deputies so that the Minster’s worship, all of which was set to music, could continue in their absence. The deputies were known as the Vicars Choral and they had to be able to sing or chant the services. They learnt young, they had to be able to sight read and they needed to know 5,000 items or choral chant.

The clergy collectively prospered. By dint of taxes and, indeed substantial sums taken from the wealthy for the singing of masses for the dead, their wealth became substantial. By 1400AD the clergy had a portfolio of 240 local properties, all of which they rented out.

Then came the abolition of the monasteries, clergy married and drifted away from Bedern to family life. That said, whilst chastity may have been the rule of monastic life, there is ample evidence of Vicars Choral succumbing and having female guests to stay or staying away when they should have been in the college precincts. Within just over the century, the Commonwealth and Protectorate had arrived and, with it, diminished the powers of the Cathedral churches which led to the area being further reduced. But interestingly, Bedern was the home of St Peter’s School during the latter part of the Civil War, possibly because their own buildings had been war-damaged.

Speeding through history, Bedern and the Hall, sank into a slum area for Irish immigrants during the famine of the 19th century.

Restoration resulted from a combination of factors; first, there was the Esher Report and the desire to redevelop much of central York, including the Aldwark area. This led to the beginning of a long term relationship with York Archaeological Trust. Its work gave us a great historic insight into what Bedern Hall was and what were its links. Next the then York City Council spearheaded the restoration programme but a number of notables from outside the Council were conspicuous by the involvement and this, in turn, led to the Guild perspective. The foresight of the Guilds to create the Bedern Hall Company to ensure independent management and conservation was great. So much conservation and restoration has come about over the years because of the contribution and commitment of those who believe in the cause.’